Destin is a vacation destination unknown to many, at the Panhandle of Florida watching the Gulf of Mexico. Destin traces its immediate history to a fisherman, Leonard Destin, who moved here from New London, Conn., and settled in Northwest Florida about 1845. For decades, he and his descendants fished and navigated the only channel passage to the Gulf of Mexico between Panama City and Pensacola, known as Destin’s East Pass. It is a small fisherman town between Panama Beach and Pensacola, which expanded into vacation rental type of accommodation with its variety of condominiums on the shoreline.

In our stay, we chose Destin Condo Rentals by Owner to rent a condo at famous Pelican Beach Resort. One bedroom condos at the front of the building with panoramic views.

Destin is one of the best dive destinations in the US. Because of the unique geographic location, deep sea diving is only minutes away from Destin. A natural reef is carved out of limestone, it’s ledges covered with coral and sponge.

A man made artificial reef is also located nearby depths at sixty to over 100 feet down. This is where a lot of experienced divers go to explore old ship wrecks that have been placed here to attract bait fish, which in turn attracts large trophy fish. There are four Navy vessels here including a Liberty ship, as well as an old tug boat, some airplanes and even parts of the original Destin Bridge! Clouds of fish may be seen in all sizes from small tropical beauties to large game fish. The reef attracts the Amberjack, Cobia, Flounder, Grouper and Snapper

Located approximately 4 miles south of Destin’s East Pass. Amberjack Rocks is a single limestone ledge approximately 6 feet tall running east and west parallel to the shoreline. This reef faces to the north with a J curve on the west end. This reef is home to amberjack, grouper, snapper, flounder and trigger fish along with an abundance of tropical fish, octopus, eels and more. A good first time dive because its fairly easy to navigate.

4 miles south from Destin East Pass, this is a single ledge with many large boulders with deep cracks and crevices. Shoreline Reef is approximately 5 feet tall and runs north and south then turns east and west; being home to octopus, scorpion fish, toad fish, eels and an abundance of game fish such as, amberjack, grouper, scamp, snapper, trigger fish and more.

4.5 miles southeast from Destin East Pass, reef is approximately 2 to 4 feet tall and runs north east, southwest, primarily facing northwest. It has a short double ledge running parallel to the main ledge. It is home to frog fish, many tropical fish and is good for macro photography. Also home to shovelnose lobster.

5 miles from Destin East Pass, this is a large round rock with many cuts and crevices. This reef is shallow, very easy to navigate, and is usually very fishy. It is home to many black snapper along with grouper, red snapper and amberjack. Not uncommon to see nudibranchs here and shovelnose lobster.

Wreck was put down as part of the artificial reef program in 1972. It is approximately 380 feet long and lays on the ocean floor. The mid ship has a crack running across the ship, where the fire furnaces were located. You can still find bricks although they were scattered during hurricane Opal. The north end has a second crack running across, although one side has fallen and the end is now twisted. The ocean floor is 87 feet and the top of the deck (wall) is 68 feet.

Common to see sharks, southern sting rays and eagle rays. In the summer there is an abundance of barracuda, amberjack and spade fish. Common to see goliath grouper and an assortment of other critters.

11 miles southeast of the Destin East Pass, this 85 foot tug boat sits in 100 foot of water and sits upright with a top depth of approximately 70 feet. The tug boat sits on the sea bed. This wreck normally has schooling amberjack and at the right time of the year its not uncommon to see cobia and the large southern sting rays. High profile so it’s a great computer dive.

This barge was sunk as part of the artificial reef program. It sits in approximately 74 feet of water and lays on the sea floor.. This barge was deployed with round fuel tanks on top with holes cut in them for a fish habitat and a dump truck bed welded on top of the tanks. When hurricane Andrew came through all the fuel tanks rolled off, surrounding the barge and the dump truck bed was never found again. This dive is easy to navigate, it is a good second dive since its approximately 60 feet to the top and is good for new divers.
Usually an abundance of amberjack, spade fish, red snapper and flounder. In the spring there is usually a lot of shovelnose lobster, making this a great night dive.

Old Destin Bridge turned into a reef as part of the artificial reef program. The site has three distinct reefs. The Main Stack has a profile of 58 feet to 69 feet. It has big slabs of roadway along with concrete rubble. Lots of hiding places for fish, lobster, eels and octopus. Turtles, manta rays, sharks along with an occasional whale shark have been seen on the bridge rubble. The other stacks of rubble are not as large, but interesting in there own way.

Located  7 miles down the east beach from the Destin East Pass, it sits in 57 feet of water. This wreck was put here as a open water training site for beginner classes. The Miss Louise was sunk in 1997, she is an 85 foot push tug with 25 foot push pads on the north bow of the wreck. She sits pointing north to south and she used to have a profile of 25 feet to her top. Unfortunately after many storms her wheelhouse has been torn off never to be seen again. Her top deck is now 45 feet deep and great for training dives. 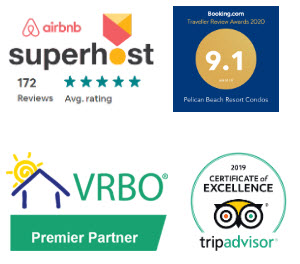 Half Shells on the Harbor